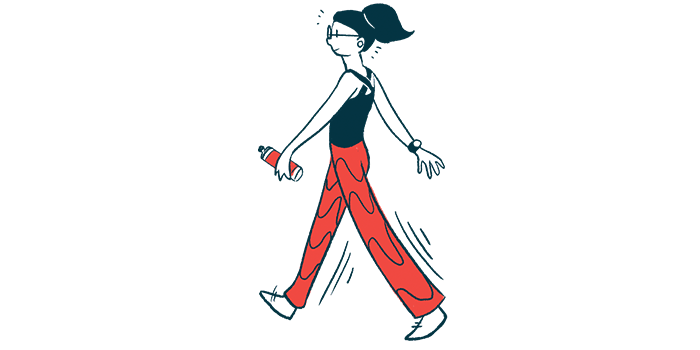 Using robotic devices during gait training can improve walking abilities in people with multiple sclerosis (MS), particularly among those with severe disability, a review of 17 studies has found.

However, the benefits lasted only a few months, suggesting that patients need regular training to maintain the improvements.

The study, “What does evidence tell us about the use of gait robotic devices in patients with multiple sclerosis? A comprehensive systematic review on functional outcomes and clinical recommendations,” was published in the European Journal of Physical and Rehabilitation Medicine.

Walking (gait) impairment is common among people with MS, with some experiencing subtle changes in walking abilities in the early stages of the disease.

Need to Know: What Is Gait?

Gait-based physiotherapy has been shown to improve gait and mobility, as well as reduce the risk of falling. For those with more severe disabilities, however, gait training can be a challenge or impossible.

Body-weight-supported (BWS) treadmill training — which suspends the patient in a harness to reduce weight-bearing load and help with postural stability — is one approach to gait training. Motorized robotic systems using BWS training with treadmills have also been developed, called robotic-assisted gait training (RAGT). More recently, robotic exoskeletons — an externally worn device that encases a patient’s hips, back, and legs during rehab — can assist with lower limb gait movements.

Evidence supporting the efficacy of RAGT in MS patients is growing, with studies showing improvements in walking speed and endurance, balance, and quality of life. Some reports suggest the benefits of RAGT over conventional treatments in more severe cases, but the evidence is inconsistent.

The goal of this review study, conducted by researchers across Italy on behalf of the CICERONE Italian Consensus Conference on Robotics in Neurorehabilitation, was to examine studies published in 2010 to 2020, focusing on the role of robotics for lower limb rehabilitation in patients with MS.

A total of 17 studies met the inclusion criteria, of which two were reviews, one was a single-group (small-scale) pilot study, and 13 were randomized controlled trials, in which participants were randomly assigned to receive the intervention or a comparison (control).

The clinical trials included 10 to 72 participants, and the two reviews had 309 from nine studies and 205 patients from seven studies, all of which investigated various types of robotic devices.

Most participants had a range of walking disabilities, with two studies including patients with an expanded disability status scale (EDSS) from 1.5 to 3.5 (minimal disability), while the other studies enrolled those with a minimal EDSS score between 4 and 6 (moderate to severe disability). The highest EDSS score was 7.5, which refers to patients unable to walk more than a few steps and who are mostly restricted to a wheelchair.

RAGT was assessed in 13 studies, which used the Lokomat device (a robotic treadmill), and two studies tested RAGT with a device controlling the outer lower limbs with a mobile platform.

RAGT was used for 30- to 40-minute sessions, ranging from two to five sessions per week, depending on the study. The total length of treatment was from three to eight weeks, with a maximum of 18 weeks reported in one study.

One study evaluated the Keeogo, an exoskeleton device attached to the pelvis and lower limbs, while another investigated the EKSO-GT exoskeleton. Exoskeletons were either compared with conventional over-ground gait training or separately in the single-group pilot study.

The duration of robotic training with the Keeogo exoskeleton was longer due to at-home rehab, in which patients could wear the device for the entire day. In those with moderate gait impairment (EDSS less than 6.5), the exoskeleton improved gait and reduced the time to climb up the stairs. However, the exoskeleton had little impact on total physical effort, as measured by the number of steps per day or motor skills.

In MS patients with an EDSS from 6 to 7.5, the over-ground exoskeleton treatment significantly improved walking speed for short distances and reduced energy output.

High-intensity conventional over-ground walking training was also effective in improving most of the parameters of walking. Three clinical trials and one review concluded that conventional treatments had beneficial effects on walking and endurance comparable to RAGT.

The second review, however, concluded that robotic training was always more effective in improving gait endurance compared with conventional treatments, “but the results are not considered sufficient to make significant clinical conclusions,” the researchers wrote.

A comparison of BWS treadmill training and RAGT showed that both approaches were equally effective in improving walking abilities. RAGT with virtual reality had additional benefits in improving cognitive outcomes.

Finally, follow-up assessments showed the benefits of these various treatments were sustained one to three months afterwards, but they no longer had positive effects after six months.

“Future studies are warranted to evaluate the role of RAGT not only for walking and balance outcomes, but also for other gait-training-related benefits, to identify appropriate outcome measures related to a specific subgroup of MS subjects’ severity,” they added.