Researchers posit the approach may be new molecular target for treatment

Blocking the activity of Spns2, a transporter of the sphingosine 1-phosphate (S1P) protein, reduced the severity of multiple sclerosis (MS) in a mouse model, a new study shows.

The findings point to Spns2 as a new molecular target for MS treatments that could reduce the side effects associated with currently approved modulators of S1P receptors.

“This study would present Spns2, an S1P transporter as a novel drug target for the treatment of MS and possibly other inflammatory diseases that could reduce the risks of having multiple side effects that have been reported for S1P receptors’ modulators,” Nguyen Nam Long, a professor at the National University of Singapore and co-author of the study, said in a university news release.

In MS, immune cells launch an inflammatory attack in the brain and spinal cord that damages nerve fibers, giving rise to symptoms.

S1P is a signaling molecule that helps coordinate the movement of immune cells throughout the body. By modulating S1P receptors, these therapies “trap” inflammatory cells inside lymph nodes, preventing them from traveling to the nervous system to cause damage. But these medications can cause side effects such as abnormal heart rate and reduced lung function because S1P receptors are also found in those tissues.

The Spns2 protein is a transporter that helps control the release of S1P. “Membrane transporters have been neglected to explore as drug targets,” Nguyen said, noting that targeting the transporter might avoid the side effects from targeting S1P receptors.

Using genetic engineering techniques, the researchers created mice whose cells would stop making Spns2 when a chemical was administered. The team then induced experimental autoimmune encephalomyelitis (EAE), a neurological inflammatory disease that’s used as a model for MS, in the mice.

Results showed mice lacking Spns2 were protected from developing EAE. They also had significantly fewer Th17 cells, a highly inflammatory immune cell linked to the development or progression of MS, in their nervous system.

“Our team as well as other researchers in the world are searching for the inhibitors of this protein in a hope to uncover a line of novel therapeutics against MS and other inflammatory conditions,” Nguyen said.

The researchers also assessed how removing Spns2 altered the movement of S1P through the mice’s bodily fluids.

When blood is pumped out through blood vessels to tissues, it drains through the tissue, bathing the cells in nutrients. After draining, this fluid — now called lymph — is collected in lymphatic vessels before being returned to circulation in the blood. Lymph is densely populated with immune cells that patrol for infectious invaders, especially in structures called lymph nodes.

Results showed that removing Spns2 led to lower levels of S1P in lymph, but not in blood. The findings also indicated that different forms of the S1P molecule were released into lymph and mice lacking Spns2 showed structural abnormalities in their lymph nodes’ shape.

“These results indicate that lack of Spns2 affects both S1P secretion and [lymph node] vasculatures,” the researchers concluded. 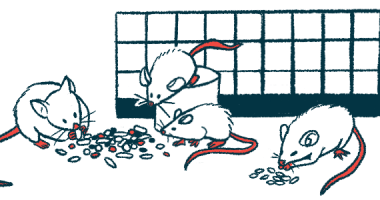