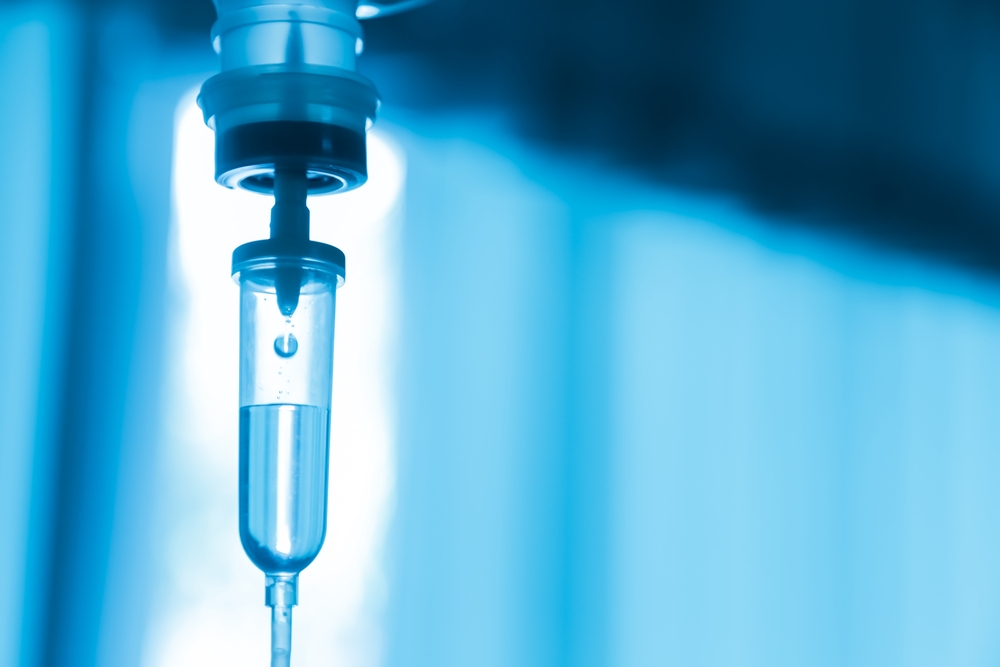 Both Ocrevus (ocrelizumab) and Rituxan (rituximab) trigger a similar release of inflammatory mediators after a first infusion, with little difference seen in infusion reactions among a small group of multiple sclerosis (MS) patients treated with either therapy, said researchers from the Rocky Mountain MS Center at the University of Colorado in a presentation at the 7th Joint ECTRIMS-ACTRIMS Meeting held in Paris Oct. 25–28.

Ocrevus was approved to treat both relapsing and primary progressive forms of MS in the U.S. this year;  rituximab — sold as Rituxan for indications like non-Hodgkin’s lymphoma, chronic lymphocytic leukemia, and rheumatoid arthritis — is used off-label to treat relapsing MS.

Both Ocrevus and Rituxan are based on antibodies that target B-cells with CD20 molecules on their surface — a type of cell thought to be involved in MS development. But the two treatments differ, for instance, in the targets they recognize on CD20. Both are administered through intravenous infusions, a method of drug delivery associated with infusion-related reactions.

It has been hypothesized that differences between these therapies result in different degrees of infusion-related reactions. So researchers looked for differing reactions by assessing cytokine levels after infusion.

Further analyses should provide a clearer picture of how the inflammatory mediators, or cytokines, are related to such reactions in patients given either therapy for the first time, said Enrique Alvarez, PhD, senior investigator on the study, which is not linked to their mutual developer, Genentech.

The poster presentation, “Characterizing the cytokine profile before and after antiCD20 infusions: comparison of rituximab versus ocrelizumab,” was the result of a small study at the University of Colorado, initially intended as a pilot study for a larger trial exploring the safety of switching from Rituxan to Ocrevus.

The study gathered patients having a first infusion of Ocrevus or Rituxan at the MS center to analyze cytokines released. Researchers believe these immune mediators are involved in the development of infusion-related side effects.

The team focused on two-time points — two and four hours after the infusion — as the levels of cytokines tend to  lower after four hours, said Nassim Zanganeh, a clinical research coordinator at the university.

Interestingly, an analysis of 36 such factors showed little differences between the two treatments. Differences found were also small, Alvarez said, adding that if they had corrected the statistical tests for multiple comparisons — an approach to reduce the risk of identifying links by chance — the differences would no longer be significant.

The researchers did, however, note that reactions tended to come earlier with Ocrevus, but said this difference may be related to the more rapid infusion of the drug.

The team also attempted to see if patients with infusion reactions were those with increased cytokine levels, and detected no significant effects. But, Alvarez said, the small numbers of included patients meant they had to pool data from Ocrevus and Rituxan groups to perform that analysis, making it impossible to discern potential differences between the groups.

“But my guess is that patients with infusion reactions will have some significant changes in cytokines that the other ones didn’t,” he said.

The team plans to continue to enroll patients into what are now very small groups. Only 16 patients were included in the Ocrevus group and another five received Rituxan. Of them, only five had reactions in the Ocrevus group, leaving the team with little material to analyze.

While work with recruiting more patients is ongoing, researchers also want to examine if the patients who had infusion reactions had specific characteristics before the infusion. This is an important part of an analysis, as such differences may turn out to be more important than cytokine levels in predicting infusion reactions.

It is also possible that the small differences noted are linked to specific types of reactions, but at this point, this is merely speculation, as researchers have not examined the data in this way.

In addition to including more patients, some study patients will also be followed over time in an effort to detect potential long-term changes in cytokine profiles after Ocrevus and Rituxan infusions, the researchers said.