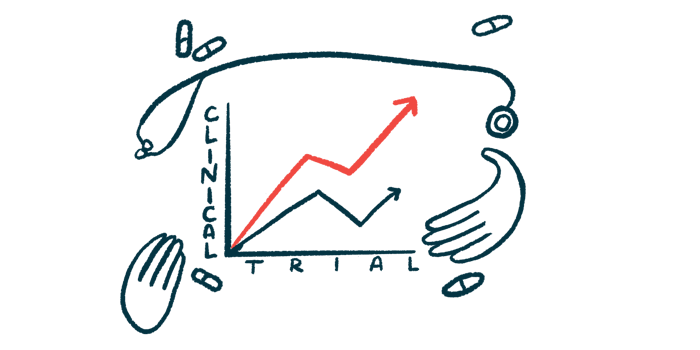 Serum levels of neurofilament light chain (NfL) — proteins found in nerve cell projections — can help in the prediction of disease progression among people with relapsing forms of multiple sclerosis (MS), according to an analysis of data from two large Phase 3 trials.

“Prognostic Value of Serum Neurofilament Light Chain for Disease Activity and Worsening in Patients With Relapsing Multiple Sclerosis: Results From the Phase 3 ASCLEPIOS I and II Trials,” was published in Frontiers in Immunology.

There currently is a huge need for prognostic biomarkers that can help clinicians in making a prediction on which MS patients are more likely to have more severe disease progression. Such biomarkers would allow healthcare providers to identify people who may require more aggressive treatment approaches over the course of their disease.

NfL is a protein found in axons, the nerve cell projections that conduct electrical impulses, and is an MS biomarker. When nerve cells are damaged, NfL proteins are released into the spinal canal and blood.

Levels of this biomarker in the serum — the clear liquid part of blood — are increased in MS patients. Moreover, they have been shown to be correlated with signs of disease progression in people with relapsing forms of MS.

It is thus possible that “measuring sNfL levels can add value as a prognostic biomarker to identify patients at higher risk for future disease activity that can assist clinicians in decision-making,” the researchers wrote.

The trials had compared the safety and efficacy of Kesimpta — marketed by Novartis — against Aubagio in people with relapsing-remitting MS and active secondary progressive MS.

Now, in a study funded by Novartis, researchers set out to determine the relationship between serum NfL levels at the study’s start (baseline) and signs of disease progression over 2.5 years in the trials.

Participants were first categorized based on their NfL levels at baseline. Of a total of 1,746 people with serum NfL measurements taken at baseline, 870 (49.8%) were considered to have “high” NfL levels and 876 (50.2%) had “low” levels.

Specifically, the median NfL levels were 14.23 picograms per milliliter (pg/mL) for the high group and 6.76 pg/mL in the low-risk patients.

Regardless of their assigned treatment in the trials — some were given Kesimpta and some Aubagio — people with high baseline NfL levels showed a greater accumulation of new and enlarging brain lesions. This was true even among those who appeared free of disease activity (with no inflammatory brain lesions) at the study’s start.

Similarly, patients with high NfL in both treatment arms lost more total brain volume per year than those with low NfL levels. This difference was most pronounced in a brain region called the thalamus, which has previously been associated with MS disease progression and cognitive impairment, the researchers said.

However, serum NfL levels did not significantly predict annual relapse rates or confirmed disability worsening in either treatment group. That possibly was because rates of these events were already low in most patients, the team noted.

Similar observations were made with regard to brain lesions, relapse rates, brain volume loss, and disability worsening in a subset of recently diagnosed and not previously treated patients. These findings suggest that NfL levels can predict a later prognosis even early in the course of the disease.

Since NfL could predict disease outcomes across both treatment groups, the results suggest, “that the prognostic effect of sNfL is not limited to a specific treatment,” the researchers wrote.

Overall, the data suggest that NfL is a promising biomarker for MS disease progression prediction, and may offer significant advantages over baseline MRI measurements, according to the researchers.

Specifically, NfL can be used to predict outcomes even among patients who do not yet show signs of brain lesions. The biomarker also can reflect spinal cord damage, which would be missed on a brain MRI, and may last longer than the ability to see new lesions on MRI images. Such lesions can disappear over time and be underestimated, the team noted.

“This study also supports the potential prognostic value of both sNfL and [certain brain] lesions as predictors of higher probability of clinical progression in patients with MS,” they concluded.