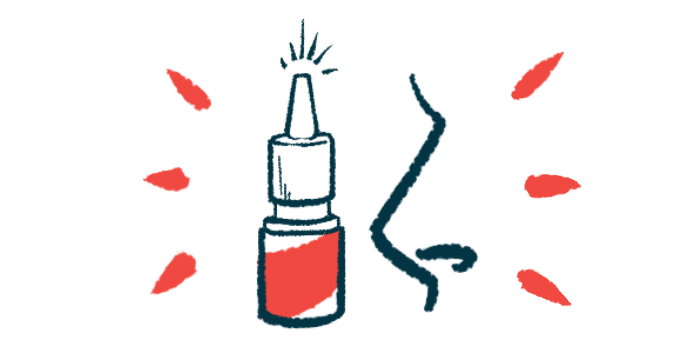 Foralumab nasal spray, an experimental therapy by Tiziana Life Sciences that’s being tested for multiple sclerosis and other autoimmune and nervous system diseases, was found to be safe and able to modulate the immune system in healthy volunteers, a study has found.

Researchers failed to detect antibodies targeting foralumab in the bloodstream, which means the therapy does not trigger an unwanted immune response against itself.

These results were observed at a dose of 50 micrograms (mcg), the same that’s being used in six people with non-active secondary progressive multiple sclerosis (SPMS) who are receiving the therapy under expanded access programs.

“The finding that the immune effects were predominately observed at the 50 [mcg] dose rather than the lower and higher doses studied was intriguing,” Matthew Davis, MD, chief medical officer of Tiziana, said in a company press release.

The 50 mcg dose is also one of the options to be tested in a placebo-controlled Phase 2 clinical trial for people with non-active SPMS that is expected to launch in 2023.

Foralumab is an antibody that’s been designed to reduce inflammation by binding to and blocking CD3, a protein found on the surface of immune T-cells. This lessens the activity of T-cells that contribute to damaging immune responses, while increasing the activity of regulatory T-cells, a group of cells that work to prevent abnormal immune reactions.

While a major bottleneck for antibody-based therapies is their risk of side effects, foralumab is designed to minimize its binding to unwanted targets. Its administration into the nose is also expected to result in fewer adverse events compared with other routes of administration.

In the study, researchers at Brigham and Women’s Hospital and Harvard Medical School in Boston set out to investigate the safety of intranasal foralumab in humans and determine exactly how it changes the immune system.

The study included 27 healthy volunteers, ages 19 to 65, who were randomly assigned to three doses of intranasal foralumab — 10, 50, or 250 mcg — or a placebo, given daily for five days. All volunteers were then monitored for side effects and immune parameters on days 7, 14, and 30 after treatment.

Results showed that intranasal foralumab was well-tolerated, with no systemic side effects reported at any dose. Moreover, none of the volunteers developed antibodies against foralumab or experienced Epstein-barr virus reactivation, which is sometimes seen when CD3 antibodies are injected intravenously, or directly into the bloodstream.

To understand how foralumab affects immune cells, the researchers looked at the two main types of T-cells: CD4 and CD8 T-cells. The big difference between the two is that CD4 T-cells assist other cells to mount an immune response, whereas CD8 T-cells directly induce the death of cells that are deemed dangerous or no longer needed by the body.

Interestingly, the biologic effect of intranasal foralumab was markedly different from that seen with intravenous CD3 antibodies. Rather than acting on the T-cells circulating in the blood, the treatment acts on the mucosa and travels to the cervical lymph nodes — immune structures where most immune cells are matured.

Also, foralumab’s effects included a reduction in the number of CD8 memory T-cells — a type of CD8 T-cells that remember previous pathogens and respond quickly to a new encounter — and in the levels of proteins used by these cells to induce the death of pathogens.

The CD8 T-cells also acquired a regulatory function, as they were able to kill CD4 T-cells. There was also an increase in naïve CD4 and CD8 T-cells, which are T-cells that have never encountered an antigen (any substance that can trigger an immune response).

These changes suggested an overall reduction in cells primed to attack the body’s own tissues and able to cause excessive immune responses, which would translate in less inflammation and nerve system damage.

Notably, the greatest benefits were seen with the 50 mcg dose. However, the team believes this is “likely due to the partial signaling that occurs at intermediate doses which favors the induction of regulatory cells.”

The team also examined which genes were turned on or off after treatment with foralumab, which confirmed the changes toward less inflammation.

“Foralumab is a novel form of immunotherapy therapy for the treatment of patients with progressive neurologic disease in which microglial [most prominent immune cells of the central nervous system] activation occurs including MS,” the researchers concluded.