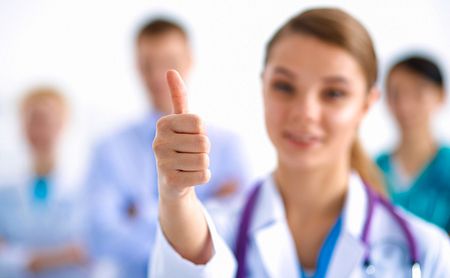 Vumerity (diroximel fumarate) continues to be safe and well-tolerated, in addition to reducing measures of disease activity in people with relapsing-remitting multiple sclerosis (RRMS), according to updated data from the ongoing EVOLVE-MS-1 Phase 3 clinical trial.

These interim results were delivered by Sibyl Wray, MD, in the poster “Interim Safety and Efficacy Outcomes in Patients With Relapsing-Remitting Multiple Sclerosis who Received Diroximel Fumarate for Up to 2 Years,” at the recent American Academy of Neurology annual meeting.

It is similar to Tecfidera (dimethyl fumarate), but is expected to cause fewer gastrointestinal (GI) side effects.

Enrolled patients had previously been given either Vumerity or Tecfidera in the five-week, Phase 3 EVOLVE-MS-2 study (NCT03093324), or had been diagnosed within the previous year and were not yet taking MS medication.

Data reported came from 1,057 adults, between the ages of 18 and 65, who were enrolled as of Feb. 7, 2021. At that time, patients were taking Vumerity for a median of two years, and roughly a quarter of them (25.2%) were still receiving treatment.

Side effects were reported by 87% of all trial participants, but most (90%) were mild to moderate in severity. Of the 30% of patients who reported adverse GI side effects, 0.7% stopped treatment because of them.

Tecfidera is associated with reductions in lymphocytes — a type of white blood cell found in the immune system — potentially leaving a person more susceptible to infections. As Vumerity’s active ingredient is very similar to that of Tecfidera, investigators measured patients’ mean absolute lymphocyte count (ALC) during the trial.

The team saw lymphocyte counts drop by 28% over the first year of treatment, before stabilizing. A total of 56 patients were followed for six months after stopping treatment due to at least one low ALC measure. Most (63%) recovered to normal ALC levels within a median of 15.6 weeks.

In addition to a good safety profile, Vumerity also demonstrated promising signs of efficacy, both in the overall population and in newly diagnosed patients, the researchers reported.

While patients experienced an annual median of 0.7 relapses in the year leading up to the trial, their annual relapse rate dropped to 0.13 during the trial, representing an 81% reduction in relapses. Among newly diagnosed patients, that reduction reached 89%.

Findings also suggested that Vumerity’s efficacy increased over time, as relapse rate reductions after one year in EVOLVE-MS-1 were 72% among previously treated patients, and 83% among newly diagnosed individuals.

At the time of the presentation, 82.2% of patients overall and 84.5% of those newly diagnosed remained relapse-free. No confirmed disability progression was seen at 96 weeks in most — 90.3% — of these patients.

The number of new or enlarging lesions evident in magnetic resonance imaging (MRI) scans either remained stable or declined from year one to year two.

Brain lesions with active inflammation declined significantly among both the overall population and the newly diagnosed group, falling by 66.7% and 75%, compared with baseline (study start) measures.

The proportion of patients free of such inflammatory lesions rose over the course of the study, increasing from 68% to 91.1% in the overall population, and from 55.4% to 85.9% among newly diagnosed patients.

Finally, the proportion of participants showing no evidence of disease activity — defined as an absence of relapses, disability worsening, and brain lesion progression — was 52.8% at week 48, and 34.6% at week 96. Among the newly diagnosed, 43.3% met this criteria at week 48; data for week 96 is not yet available.

“In this ongoing EVOLVE-MS-1 study, safety and efficacy outcomes of [Vumerity] were similar to previous interim reports and the known benefit-risk profile of dimethyl fumarate,” the researchers concluded. “[Vumerity] demonstrated reduction in clinical and radiological measures of disease activity in patients with RRMS and patients newly diagnosed with MS.”